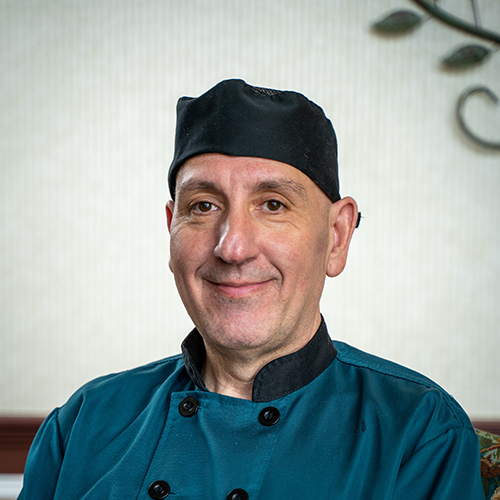 Terry Saccomagno is the Executive Chef and Assistant Manager at Valley Country Club. Terry joined his long time colleague Melodi Caruso (whom he has worked side by side with for 21 years) and came to Valley in 2009 from Alpine Country Club, where he held the same position for 24 years. Terry leads his culinary team in the daily operation of the kitchen and banquets, as well as assists with supervising the restaurant staff. He was born and raised in Brooklyn, NY and graduated from Johnson & Wales University. Terry has been in the food service industry for over 35 years with the majority of those years spent in the country club environment. Terry is considered an expert in the industry and his knowledge of food preparation and purchasing is among the best in the business. Terry is responsible for planning, purchasing, menu development, execution, and training for all aspects of the kitchen. His specialties are dominated by Italian home style cuisine, although Terry loves to be challenged with new menu ideas and elaborate dishes. In addition to his Executive Chef position, Terry is also the Assistant Club Manager where he works alongside Melodi in all matters relating to the House and Restaurant.